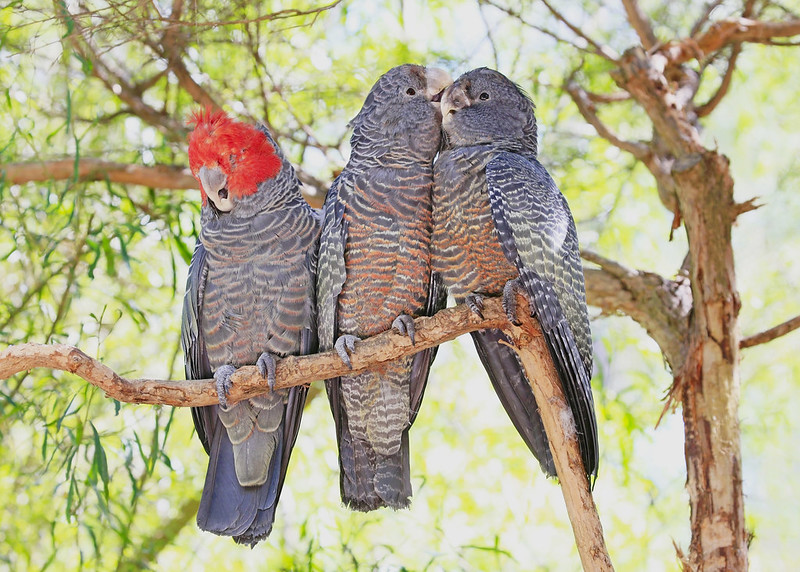 The gang-gang cockatoo (Callocephalon fimbriatum) is a parrot found in the cooler and wetter forests and woodlands of Australia, particularly alpine bushland. It is the only species placed in the genus Callocephalon. Mostly mild grey in colour with some lighter scalloping (more pronounced and buffy in females), the male has a red head and crest, while the female has a small fluffy grey crest. It ranges throughout south-eastern Australia. The gang-gang cockatoo is the faunal emblem of the Australian Capital Territory. It is easily identified by its distinctive call, which is described as resembling a creaky gate, or the sound of a cork being pulled from a wine bottle.

The name gang-gang comes from a New South Wales Aboriginal language, probably from one of the coastal languages, although possibly from Wiradjuri. It is probably an onomatopoeic name.

The gang-gang cockatoo is a grey bird with a wispy crest. The head and crest is bright red in males, but dark grey in females. The edges of feathers in underparts have edges of yellow or pink. The edges of feathers on upperarts are slightly paler grey than the rest of the feather, which makes the bird look somewhat barred. Juvenile males can be distinguished by their brighter crowns and shorter crests, but otherwise look similar to the adult female. The birds are not easily mistaken for other cockatoos, but while in flight may resemble the Galah. Gang-gangs are very social birds, but not overly noisy.(Wikipedia)