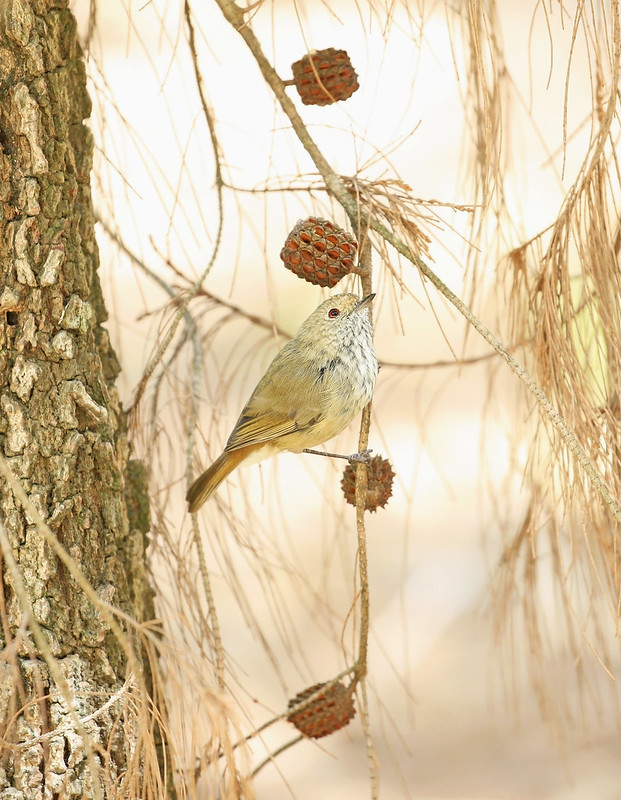 This image is included in a gallery 'INTERPHOTO * TOP FLICKR 2022' curated by Gianfranco Marzetti.

The Brown Thornbill is a small bird, but is one of the medium-sized and more common of the thornbills. It has olive-brown to grey upperparts, with a warm reddish-brown forehead scalloped with paler markings. The rump has a reddish-brown patch, the tail is grey-brown with a black band and a pale tip, and the underparts are off-white, streaked blackish on the chin, throat and chest. The eye is dark red. The sexes are similar and young birds are only slightly different to adults, with a duller eye.

The Brown Thornbill is found only in eastern and south-eastern Australia, including Tasmania.

The Brown Thornbill feeds mainly on insects, but may sometimes eat seeds, nectar or fruit. They feed, mainly in pairs, at all levels from the ground up, but mostly in understorey shrubs and low trees. Will feed in mixed flocks with other thornbills out of breeding season.

The Brown Thornbill may lack the flamboyance of a rosella or the melodious song of a butcherbird, but for many people in eastern and south-eastern Australia, they are a familiar and friendly face in the garden or the bush alike. With a cheeky demeanour, bold attitude and frenetic buzzing calls, these diminutive birds have the ability to brighten the day of anyone nearby. (Birdlife Australia)