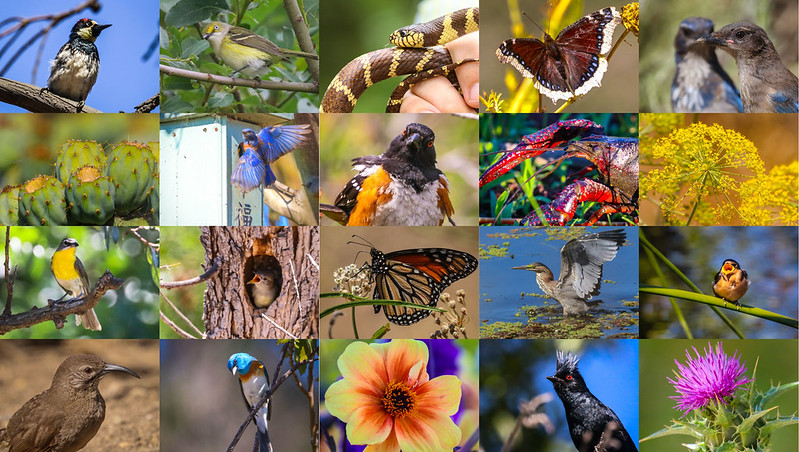 We got a hot tip about the White-eyed Vireo. (Top row photo, next to the King of Snakes.) Drive here, park there, walk a block or two.... Ca-Ching! New bird! And for the brief time it commanded the limelight, we were all mesmerized.
A smallish clot of polite birders gathered off the path. Everyone watching. Vigilantly listening and waiting. We compare equipment and notes. Who has seen what and where they saw it. We are envious of the Orange County birders. We meet Gabriel, a Santa Monica College professor and a Herpetologist. His wife jogs by us with their new baby in a stroller. I like this Gabriel and a smidgen of hope swells in my heart. This new baby will grow up to be a gifted scientist.
homepage.smc.edu/gartner_gabriel/AboutMe.html (Guess who’s holding the snake?)
We all get a little punchy after explaining to person after person what we are looking for. People walk by with whatever the current version of a boom box is called. Loud-music-to-go because the world without continuous or constant noise is obviously unbearable.
We take turns ignoring people. We size up the curious folk before we talk. Carrying binoculars or a camera gets you in. Clownish loudly patterned yoga wear merits a dumb answer. "We are watching squirrels." Gabriel snorts but I know I could have been kinder. I make myself a promise to be less mean. Maybe Gabriel's child will develop a cure for meanness.
W9 and Jerry got the Chat as a life bird at Malibu Creek State Park. We were on the lookout for the chat after using the ebird Explore the Hot Spot tool. He put on a song and dance show for us. Thrilling, but be quick if you want a photo.
And have a gander at the red crustacean deal in the second row. How can you scream and focus a camera at the same time??? Asking for a friend.
The green landscape we experienced a few months ago is rapidly fading. Birds have disappeared. Migration and nesting. They have left or they're hiding.
Slowly my bird list is growing.