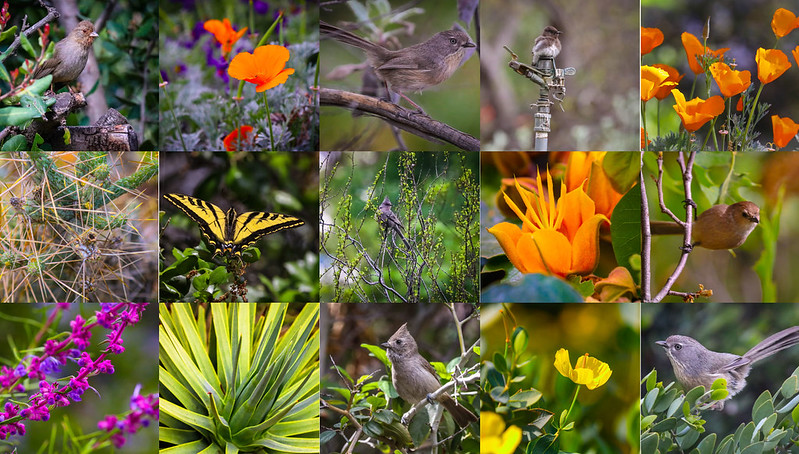 It was a last second change of plans. Jerry was going to take us up to the San Bernadino Mountains but a window of clean air and cooler weather made a visit to the Rancho Santa Ana Botanic Garden in Claremont attractive.
Chilao would have to wait for another day.
I checked ebird before we left. We might get lucky and find a sleeping Barn Owl in a palm tree. Pepla-guys had been spotted there recently. And strangely enough a Wrentit sighting was reported. Wrentits are supposed to be a coastal bird and the botanic garden was 50 miles from Santa Monica in the Inland Empire. Another mystery, kids. And I suspect the Templars are involved.
The folks at the garden were friendly and welcoming. We asked about the owl. Then we searched....
We typically yell or whisper our discoveries and sometimes point too, but that's not always helpful. So when a Wrentit appeared I was asking "Where? Where? I don't see it!" in a panic with W9 and Jerry both trying to help me get this active "drought colored" bird. Helping someone else see the bird has its own reward. It means your communication skills are good. The clock is ticking. The bird isn't where you first spot him. But you don't give up. You continue to communicate... describing the color of a shrub or pointing to a leafless tree. Tall or short? Find a landmark and go from there. It’s the equivalent of hearing a fast moving sports game, a “play by play” radio broadcast, think basketball or tennis. Or ping-pong for the love of cheese.
I scan the scene and use my peripheral vision to watch W9 and Jerry for new clues. W9 was making some quick gestures. I was crushed that I couldn't understand the message.... then I could see that W9 was swatting away flies...and not giving me signals.
Yet the Wrentit was there and even fleetingly graced us with a song… before moving far away, now backlit… Little Pleistocene fart.
So (insert generic excuse for not getting any great bird photos) a collage was in order. I forgot how to make one. I looked at lightroom templates and clicked on a few. And magically all the old collages I've made were changed and I don't know how to put them back like they were. Isn't technology the best?
The 86 acre garden had fallen under the spell of a wet Winter followed by Springtime. So much in beautiful bloom!
I can't identify the flowers and cacti beyond "Side-of-the-roadium." So pipe up if you know the ID.
Another adventure under our belts, W9 and I almost fall asleep as Jerry chauffeurs us safely through the tedious and mind-numbing drive home. Thank you, Jerry.
ebird.org/ebird/view/checklist/S35483413