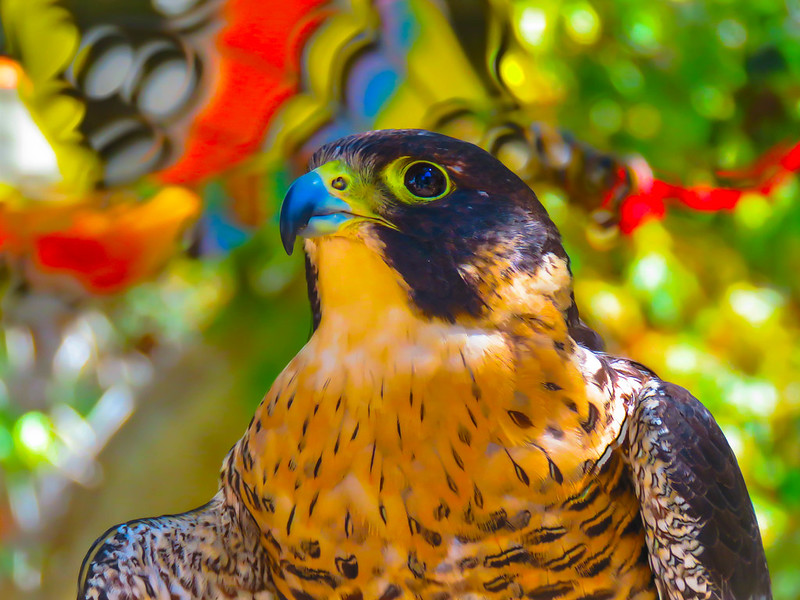 My spouse, Jerry, drove our party of four up scenic Pacific Coast Highway from Santa Monica to Santa Barbara, about a two hour journey.
The Natural History Museum is a delightful collection of Spanish Tiled buildings on a lovely stream-side setting, in the shadow of the Santa Barbara Mission.

I was inspired by Victoria Morrow's photos from the exhibit, "Butterflies Alive." She captured butterflies on beautiful flowers, in a fantastic garden setting. Quite different than my memories of the Los Angeles butterfly exhibit of many years ago; I recall chrysalis hanging on coat hangers in a tool shed atmosphere, fitting for LA; not much green.


Upon our approach to the pavilion, we were greeted by a nice young lady sitting at a display table with a Tupperware container of caterpillars and a small tree branch with chrysalis attached. We were all schooled in butterfly etiquette prior to entering: Don't touch the butterflies, watch where you step as they sometimes land on the ground, don't pick the flowers.

I had the new 80-D and W9's spare SX-60. I loved the vivid setting with the parrot icon on my old SX-50. Well, that's gone. Instead it has a HDR vivid art setting. The camera fires off 3 quick shots and combines them inside camera. The shutter speed is slow. The buffering is painfully even slower. Most shots had unacceptable blur. But the colors were crazy just how I like them.

Exiting the pavilion you are inspected for any hitchhiking stray flutterbys. You step into an anteroom with a mirror and a few butterfly nets on standby.

It was time for a quick break. We cobbled together what little we had brought in the way of consumables. A modern day "Stone Soup." We packed a couple of beers and bottled water but not much food.

Poor Dave ( Camp David Dave, our friend and neighbor) is tall and very active. He has the metabolism of a hummingbird. The rest of us stemmed our hunger with 1/4 of a chicken wrap and a bit of tuna salad eaten without utensils. Dave was ready to fashion some chopsticks from some twigs.

After the break W9 and I went back into the butterfly pavilion where I snapped at a little creepy kid who was about to molest a swallowtail. It wasn't wall-to wall children. There were also adult roadblocks. One clot of grownups spoke in Aussie accents about football statistics. They picked an unfortunate spot to drone on and on. You know how some people like to talk extra loud so that the nearby strangers don't miss a word? Well this group moved with me when I hit my limit and moved away.


Oh, and as W9 and I sat, another roadblock approached and took cellphone photos. I had already turned to shoot photos in a different direction when I hear a sharp intake of breath from W9. My initial thought was W9 is not afraid of bugs but she's wearing sandals so..... Roadblock had stepped on and squashed a Buckeye Butterfly. W9 witnessed a murder. So much for "Butterflies Alive" I guess.
Jerry and Dave appeared to round us up. A raptor event was underway outside. All the birds were rescues that could not be released for various reasons.
The Peregrine Falcon didn't have a "good side." She had one bum eye, a boo-boo on her beak, and a droopy wing. Not bad for a seven year old! All the birds were happy with their handlers who explained that they rotate which avian they care for so the birds don’t get particularly attached to one person. The handlers and birds were calm and encouraged us to move in closely. My shots looked fabulous in the viewfinder of the SX-60 however, later when viewed on the computer, not so much. Here is Lady Peregrine Falcon with a kite hanging from a tree in the background.

It was a 2 and 1/2 hour drive home, trudging through beach traffic, on a summer’s Sunday afternoon. Well worth the effort.