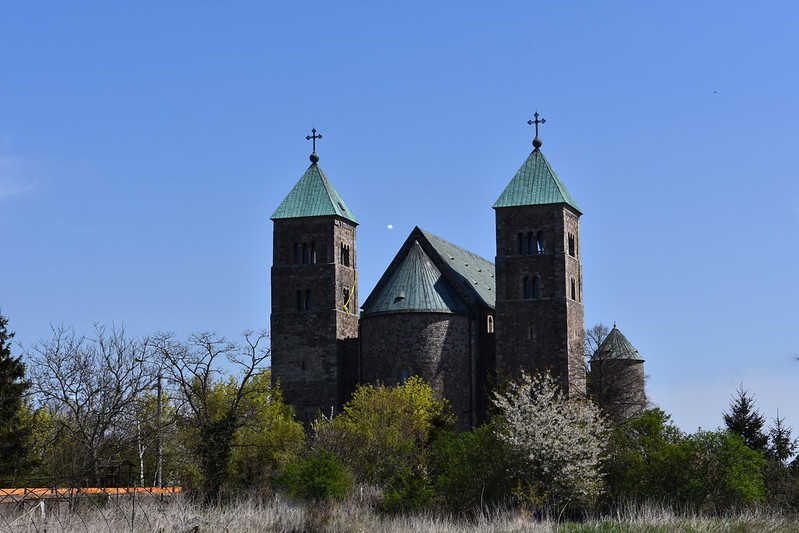 The Collegiate Church of St. Mary and St. Alexius (Polish: Kolegiata w Tumie) is an encastellated Romanesque church located in the village of Tum near Łęczyca, in central Poland. It was constructed out of granite blocks and sandstone in the mid-12th century.
The church was built using the opus emplectum technique. It has the form of an aisled basilica with galleries, a twin-tower west façade, and two apses (west and east). It was reconstructed in the 15th, 18th and mid-20th centuries; during the latest reconstruction the church returned to its simpler Romanesque form and round turrets at the east were added. The main (north) portal is sculpted and dates back to the first half of 12th century.
The temple stands on top of a holm or islet which was once surrounded by wetlands and marshes. There is evidence from a papal bull issued by Pope Innocent II that a wooden monastery of the early Benedictine Brothers pre dated the church by at least a century.Older excavations and historical analysis suggested that the monastery was founded by Boleslaus I, the first King of Poland, and Saint Adalbert of Prague in approximately 997 AD. However, more recent studies prove that it was most likely founded during the Restoration period, in the second half of the 11th century. The monastery was demolished to make way for the current church.
Historian and painter Władysław Łuszczkiewicz noted that the islet (and the nearby mound) served as a small fortified stronghold, or gord.[5] He justified his claim with the location particulars, as churches would be founded in the vicinity of populated settlements or castles than on isolated land.
The construction was initiated by Janik, Archbishop of Gniezno, in around 1149.[4] According to a legend, the local townsfolk from Łęczyca believed that the dimples in stonework were made by the hands of Devil Boruta, who attempted to destroy the church. The unfinished structure was consecrated on 21 May 1161 by officials and princes.