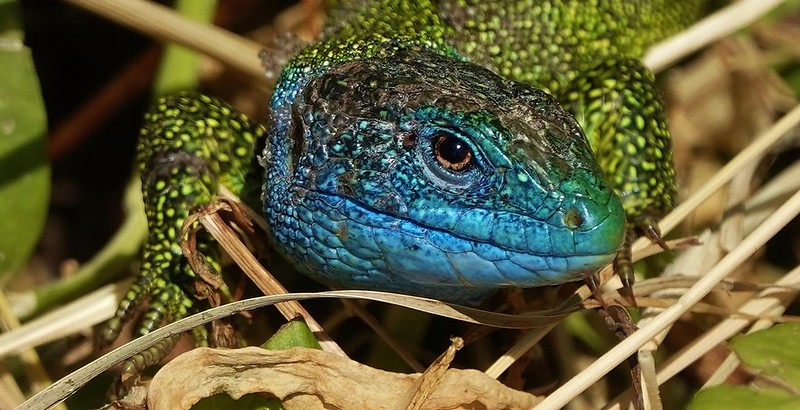 IF YOU LIKE THIS PHOTO, PLEASE VISIT MY BEST NEW GALLERIES (NOT - YET - ON FLICKR ;-) HERE: www.lacerta-bilineata.com/western-green-lizard-lacerta-bi...

When male western green lizards are in love, their face turns blue. This doesen't happen instantly (they can't change color at will like chameleons); the lizards need to shed their old, slightly less colorful (but also very pretty) skin first, and once that is accomplished, they appear in the beautiful "wedding suit" you can see in this photo.

With this look they try to impress the lady lizards during mating season, which lasts approximately from May to June, but the colors are the most striking in the immediate aftermath of the lizards losing their "old coat". I was very lucky to capture this gorgeous male at this very moment; in fact, you can still see parts of the old, dark skin covering the top of its head and other parts of the body where it hadn't quite come off yet.

But I was lucky in more than one sense with this photo. Let me explain (I have an idea some photographer or other here on Flickr will be able to sympathize with the anecdote that follows ;-). This year in May when I hoped to photograph the green lizards around my vacation home with my newly purchased camera, I soon realized something was different from the years before, because I couldn't find a single one of my green friends in their usual spots in my garden.

As I would learn over the next few days, the entire western green lizard population had relocated from my garden into a huge fly honeysuckle shrub just outside my garden next to an empty horse pasture where they were relatively safe from the growing number of cats in our village that had specialized in lizard hunting. Up in that shrub, not only was it hard for ground predators to get at them, but the lizards also had an excellent 360° view of their surroundings.

Western green lizards are naturally very shy, but this apparently traumatized group now had become hyper-alert to anything approaching them, and they immedately fled into the thickest of the leaves whenever I tried to get near enough for a usable photo. It took me another several days until I had finally figured out at what times of the day the males usually left the fly honeysuckle shrub; I wanted to know their "schedule" so I could be there before them and blend in with the environment, ready to photograph them as soon as they would show up on the ground.

And all my meticulous, hard work seemed to pay off: the first day I took this appraoch a gorgeous male showed up just where I expected it to (although Mr Lizard had me waiting for alomst two hours!). Alas, I hadn't considered where the sun would be and had installed myself in such a stupid angle that the lizard was backlit; in all the photos the little devil appeared only as a mostly black silhouette against the bright morning sun. I cursed my stupidity, tore out my hair and was close to throwing my expensive new camera against a wall in anger and frustration. Then I remembered the cold beer in the fridge and realized that life was still worth living, and I promised myself to do better next time.

The next day I was smart enough to make camp in a spot form where the object of my photographic desire would be perfectly lit (from the lizard's perspective, now I would be the black silhouette against the sun ;-). I waited. And I waited some more. And it was hot and getting hotter by the minute. After nearly 3 hours during which my neighbors started to give me very funny looks (in fact, they had already decided the day before that I must be crazy, what with standing motionless in front of a bush for several hours in the burning sun), around noon, I'd had enough. And that's when I heard something moving in the grass.

And there he was: barely visible through the thick green carpet, but definitely coming towards me. A few seconds later a virtual lizard king appeared, in all his gorgeous green and blue glory, and perfectly lit - and that's when I heard loud, happy voices approaching. Two young boys came running - and the lizard stopped dead in its tracks (unfortunately, it was still a bit too far away for a good photo). I'm not religious, but I started a quick prayer then and there (please God, please: let these kids not be running towards me - PLEASE!!!).

But nope, God apparently remembered that I usually refer to myself as agnostic, and surely enough the two boys ran right to where I was - and where Mr Lizard now wasn't. All that yelling and running was too much for my lizard king: goodbye and "auf Wiedersehen"; see ya next year - and off he went. And that was that. I couldn't believe it; I felt a frustration so intense wash over me I regretted ever having picked up a camera.

As for the kids, don't worry: both boys are alive and well ;-) It was the first day of their Pentecost holiday, and they had just arrived in the village. I was standing next to the empty horse pasture, and the two little boys now innocently asked me where the horsies went (they had obviously been looking forward to seeing them and now were very disappointed). I took a deep breath and muttered that I had no idea.

I don't know how other photographers would have felt in that situation, but I only wanted to be left alone (and possibly tear out what was left of my hair and reconsider that wall and what nice noise it would make upon collision with my camera ;-). Needless to say, the kids had other plans. Now that it was clear that there were no horsies, I had become the main attraction, and they weren't going anywhere. So I swallowed my anger, accepted that - obviously - the kids didn't do anything wrong (and also that I would probably never ever be able to get that desired shot with my new camera).

The boys were eager to know what I was photographing, and so I told them everything about western green lizards, about their amazing colors and how rare and shy they were, and that they were among the largest lizards in Europe and a protected species - and my two new friends became instantly fascinated. Now they wanted to wait and see this magical creature with their own eyes. I assured them there was no chance the lizard would come back after all the noise "we" had made, and just as I said this, one of the boys yelled "I see it!"

And sure enough, he was right. Apparently my lizard king had decided that a little yelling and running wasn't gonna get between him and his favorite sun-basking spot, a little heap of cut, dry grass underneath the fence of the horse pasture. I told the kids to be very still - which they were - and then we all got to see how this beautiful creature emerged from the grass, very, very slowly and carefully, and positioned itself on the heap of dry grass in such a way that it got the perfect amount of sunlight.

So in the end I got my portrait shot - and quite a few more in the weeks that followed (which you can find on my website www.lacerta-bilineata.com ). During the remainder of their holiday the two kids would run into me every now and then, and every time they excitedly talked about this fantastic, blue-headed reptile they had seen with me that day. I guess only time will tell, but I hope this encounter has sparked an interest in nature in them (I have a feeling the next time they spend their holiday in our little village, the horsies will have some reptilian competition ;-)