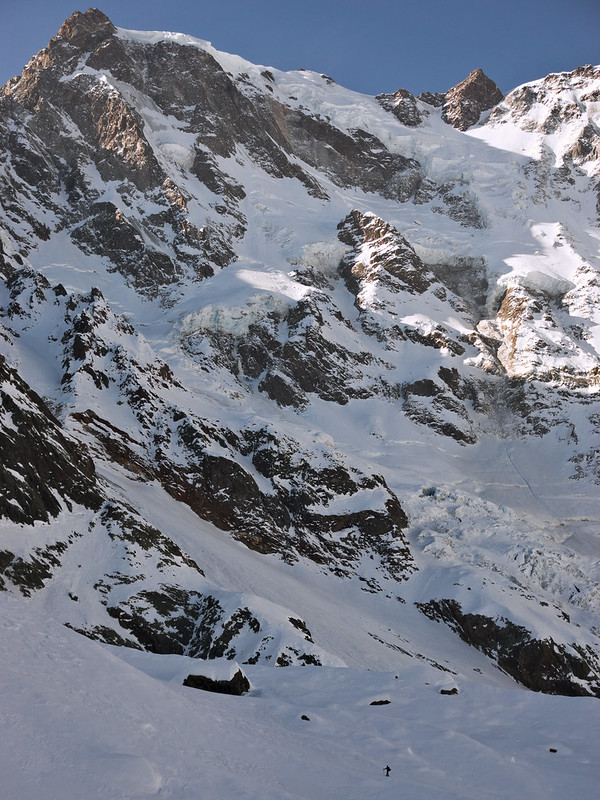 A lonely man (in the bottom of the image) ventures at the feet of Monte Rosa's impressive East face, on a cold and windy winter day.
The summit ridge towers above his footprints with a prominence of almost 2.500m (8,200ft).
This flank of the mountain is the greatest wall of the Alps, and it almost matches the size of the himalayan giants, sporting also a similar morphology, with vertical rocky cliffs interrupted by steep ice falls.
The photo shows just a portion of the wall, corresponding to the NW face of Punta Gnifetti. An impressive route runs among the crevasses and the rocky cliffs in the high left corner of the image. It was climbed for the first time by Lucien Devies and Jacques Lagarde, in 1931. It is called "Via dei Francesi", route of the frenches.
In the end, human will can do great things.
Following the reduction of the thickness of the ice and the rise of temperatures, I wonder if there is still somebody mad enough to venture up there.
Anyhow, on the day i scrambled up here it was so cold that the battery of my camera, which was almost full of charge, ran flat after just a couple of shots.
It looks strange, when just a week later the temperature, here in Italy, makes you think that spring has already kicked winter out of the door.