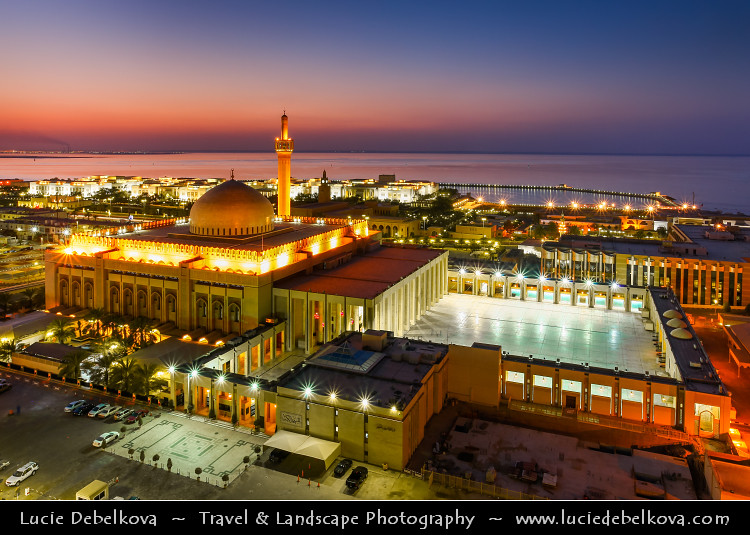 The Grand Mosque is the largest mosque in the State of Kuwait. Located on Gulf Road opposite Seif Palace. Its area spans 45,000 square metres, out of which the building itself covers 20,000 square metres. The remaining area consists of gardens with a variety of flowers, plants, palm trees, fountains and waterfalls. On the eastern side there is a vast courtyard with a total area of six thousand five hundred square metres. The Main Prayer Hall is 72 metres wide on both sides, has 21 teakwood doors and lighting is provided by 144 windows. The Dome of the Grand Mosque is 26 metres in diametre, 43 metres high and is decorated with “Isma Al-Hosna”, the 99 attributes of God [Allah]. The Grand Mosque can accommodate up to 10,000 men in the Main Prayer Hall and it has a separate Daily Prayer Hall for men also. A Ladies’ Prayer Chamber is located on a level above, which can hold up to nine hundred and fifty female worshippers. There are steps and a lift for access. Its entrance gate is in the southern wall. During Ramadan, annually, 180,000 men, women and children from Kuwait and all across the globe, attend the Grand Mosque for praying together to God (Allah) at the same time during the Last Ten Nights.

You could see from one of my previous photos that I had a chance to capture the Ramadan night prayers in this beautiful mosque before, however those prayers are middle of the night which is not ideal for capturing beautiful color and light. I've asked for special permission to come to the NBK (National Bank of Kuwait) roof again, this time during much better time of day for photography. Also note that the previous photo "Sunset behind the Power Plant" was taken from very same spot, just with different lens. It is hardly visible on this shot - the power plant is in the top left corner of this photo.