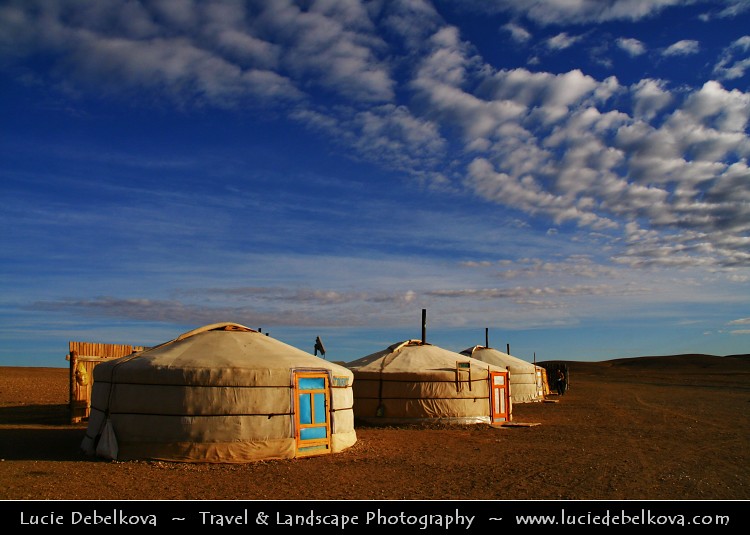 Mongolia is an amazing country and as soon as you get out of Ulaanbaatar you are in the middle of nowhere, where you can use only dust roads with no signs and no idea where you might be heading. This was our first stop and my first Mongolian Hotel outside Ulaanbaatar. I got up very early in the morning to capture this beautiful scene during sunrise.

These structures are commonly called the ger or yurt. It is one of the two basic forms of portable housing that have been used by the nomads of Tibet, Mongolia and China since the time of Marco Polo. It remains today as the primary form of portable housing in Mongolia and Tibet. The ger of the thirteenth century nomad was a circular structure measuring twelve to fifteen feet in diameter. Its walls were a five foot tall latticework, called a khana, made of willow branches that were lashed together with yak or horsehair twine. Willow poles were lashed to the top of the wall section and were brought together at the top to form a conical shaped roof. A single upright pole supported the peak of the roof.

Gers were covered with several panels of felt made of either goat or camel hair. The gers of thirteenth century Tibet were structurally the same as their Mongolian counterparts, and were covered with felts made from yak hair rather than goat. The number of layers of felt varied, depending on the season. Felts were soaked in either tallow or milk to repel moisture. The gers of wealthier nomads were much larger, and were coated with lime or white clay mixed with powdered bone, again white being a symbol of status. Those who were not as wealthy painted decorations around the smoke hole of their natural brown-black tents. The panels were then secured to the framework of the ger with ropes. The doorway, which always faced south, was covered with a flap of felt, which was either painted or appliquéd with multi-colored designs of birds, animals, vines and trees.